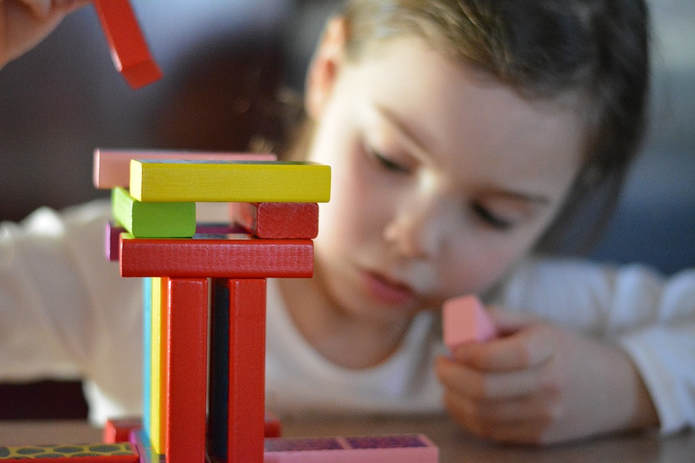 A recent study published in Psychological Science showed that children who play frequently (more than six times per week) with puzzles and blocks tend to have better spatial reasoning ability than those who played rarely. James Jirout, the lead researcher of the study, noted that "spatial play experiences could be a very easy way to boost spatial development, especially for children who typically have lower performance, such as children from lower-income households.”

In addition, researchers from the University of Colorado found that childhood play patterns have a direct influence on spatial skills scores of undergraduate students enrolled in geology courses. They found that students who engage with construction-based toys such as building blocks have significantly higher spatial skill scores than those who did not. Anne Gold, the lead author of the study stated that “By providing spatial training to K-12 children, and providing spatially demanding toys before schooling starts, we can give them the opportunity to develop skills important in fields like science, technology, engineering, and math.” She then suggested that in order to encourage more students to pursue and excel in a STEM career, early childhood centers must start training young children using spatially engaging toys.
Building Blocks as Toys for Future Scientists, Engineers, and Mathematicians
Building blocks have been a part of children’s play for a long time. They have been used to help develop motor, language, and social skills of young learners. As the children play, they need to stack and balance the blocks. When playing with others, they use language to describe or explain what they are building. They also need to share the blocks with others and respect other children’s constructions.

Spatial reasoning is another skill that is developed when building with blocks. It is the skill of mentally creating, rotating, and transforming visual images. By playing with blocks, children have to use this skill to create an elaborate castle or build the tallest tower.

The best way to develop children’s spatial skills using blocks is having an adult who plays alongside them. The teacher or parent guides the children as they play together by using spatial words. Spatial words include under, over, below, top, bottom, side, above, beneath, next to, in front of, behind, and many others. Research showed that children who hear more spatial words perform better on spatial tasks than those who hear less.

Blocks are fun and affordable toys that can be easily used in early childhood education.Giving children, particularly those from low-income families, opportunities to play with blocks can help develop spatial reasoning skills. These skills can help them succeed later in life, especially if they choose a career in any of the STEM disciplines.
​
"The play of children is not recreation; it means earnest work. Play is the purest intellectual production of the human being, in this stage … for the whole man is visible in them, in his finest capacities, in his innermost being."
~Friedrich Froebel
References:
​
Jirout, J. and N. Newcombe. (2015). Building Blocks for Developing Spatial Skills: Evidence from a Large Representative U.S. Sample. Psychological Science, 26.

Simoncini, K. and K. Larkin. 2017. Blocks are still the best present you can buy for Christmas. https://medicalxpress.com/news/2017-12-blocks-children-christmas.html#nRlv